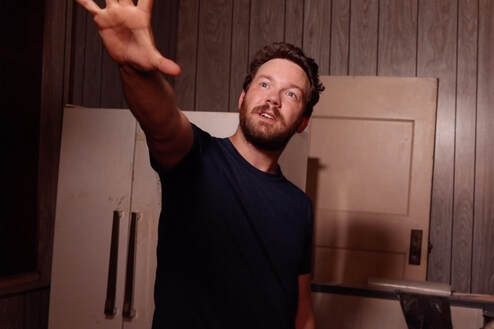 “Wallace is expressive, intense and exciting as he allows us to watch this slow breakdown, blending clearly real moments with fantastic descriptions that warp past and present and morph Charlie with the beast he fears.” -
Karen Tophem - Chicago on Stage

Charlie has lost his job, his girlfriend and countless hours of sleep. Worse still, he’s being haunted by a fox. Fantasy and reality blur as Charlie embarks on a vigilante journey, fighting back against capitalism and​“the Beast”. Set in London, amidst a financial crash and civil unrest,​“rising star playwright” (Time Out, UK) Titas Halder’s dark fairytale takes the audience on the rollercoaster of one man’s obsession. Filmed as a series of single shots, this production is a thrilling experiment in intimate storytelling.
​Photos by Kamille Dawkins
http://strawdog.org/shows/run-the-beast-down